Contracta Construction UK LTD: your gateway to the infrastructure market in Brazil

Contracta Group has been operating in the civil engineering and infrastructure industries since 1996; originating in Brazil before working internationally.

Undertaking an impressive range of global construction projects, we have worked across a myriad of different sectors and have a consummate understanding of providing infrastructure solutions for transport, military infrastructure, education and security businesses, among many others.

In Brazil, we completed high-profile contracts in three spheres of government – municipal, state and federal, as well as meeting the needs of the private market. With over 1,000 direct employees in Brazil, we are responsible for the delivery of multiple, complex projects, including urban design upgrades, sanitation and public housing program, airport and port facilities, rail and road overpasses, train and subway stations. In addition to this, our real estate department has been developing both residential and commercial buildings, further demonstrating our ability to adjust to the needs of our broad client-base.

Our group of companies, with offices in Brazil, Europe and Africa, all share the same integral philosophy; serving the needs of the market with a focus on sustainability through the use of new technology. This shapes everything that we do.

Having launched a subsidiary in the UK in 2016; Contracta Construction UK Ltd, we are in the unique position of being able to offer sophisticated knowledge of engineering and infrastructure to partner with other companies in the UK that are looking to do business in Brazil. Our office team in London, paired with our Brazilian team, market knowledge, track record and ‘on the ground’ workforce makes us a trusted gateway for UK businesses to launch a sustainable operation in Brazil.

We have not only created more than 3,000 indirect jobs through partnerships, we have completed contracts totalling over one million square metres of constructed area. Our Brazilian heritage will be incredibly useful to prospective partners; Brazil is the largest economy in South America, representing the eighth largest market opportunity in the world. This gives UK companies looking to work with us enormous potential to significantly grow a successful and profitable business operation. An International Monetary Fund report indicates that Brazil leads all other South American countries in terms of infrastructure, making the opportunities of maintenance and further development in the construction sector extremely vast.

There is potential for new business in Brazil, and with our vast infrastructure and engineering experience, we are looking forward to partnering with businesses who are serious about creating sustainable projects internationally. However, as much as we are thrilled to be able to offer this exciting opportunity to businesses in the UK, we also understand that the Brazilian market is very complex and offers many challenges, such as legal and labour conditions specific to Brazil. With our origins in Brazil, we already have key contacts and intimate market knowledge to help companies accelerate their operations into the country, overcoming such challenges. Our London team will be able to work alongside throughout; being closer to home will give UK businesses the peace of mind that our workforce in Brazil is on track to meet the needs of their new project.

For almost two decades, we have been providing civil construction solutions for the private sector as well as for federal, state and municipal governments. Our extensive range of projects in Brazil include multiple airports, terminals, train stations and state prisons. 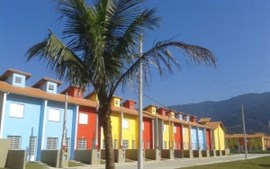 One of our major projects was for a housing development company in the city of Bertioga, São Paulo. We executed the engineering services for the construction of 400 housing units, alongside the renovation of over 170 existing housing units, implementation of infrastructure and urban planning of 1253 housing units. We completed this complex engineering project in a challenging environment; including the recovery of important mangrove areas. 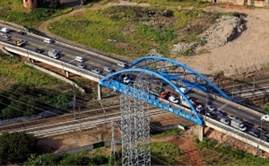 Equally important to the infrastructure of São Paulo were our executions of the Metro Adolfo Pinheiro, Alto da Boa Vista and Borba Gato, metro stations in the Santo Amaro district of São Paulo, which service over 60,000 passengers a day.

We executed these major projects, which involved the completion of extensive civil works such as visual communication, landscaping, surface drainage, tunnel excavation, metallic structure, electrical, hydraulic services, finishing and access cover for the stations. Adolfo Pinheiro was a huge achievement for us, as it was the first metro station on the new ‘Line 5’ delivered on schedule to the Government of São Paulo.

As demonstrated by these projects, we provide the highest quality services across a variety of infrastructure departments; making us the ideal partner to fulfil the construction and engineering needs of a UK business that is planning to launch their operations in Brazil.

Internationally, we have demonstrable experience and a track-record of managing projects backed by Export Credit Agencies, who provide guarantees and insurance to projects overseas in developing countries and emerging markets. We have now worked with multiple ECAs, including Brazilian, British and Italian for several projects worldwide.

In 2012 one ECA - the Brazilian Development Bank - acted as a guarantor for us to begin working with the Government of Ghana. At this point we set up a subsidiary company in Africa; secured our first contract, and successfully executed the construction of an aircraft hangar before being awarded four additional projects; including the enormous contract to redevelop Kumasi Central Market. 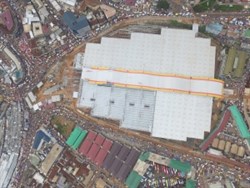 Situated in Ghana, Kumasi Central Market is the largest in West Africa and the second largest in Africa, with tens of thousands of users daily. Being approximately one hundred years old, it fulfils the everyday needs of the Kumasi habitants and attracts thousands of visitors from the surrounding countries such as Burkina Faso and Togo, to Ghana. It currently has the first phase completed and is now preparing for the second phase commencement. Upon completion of the three planned phases, this project will span up to 420,000 square metres of construction area, house more than twenty-five thousand shops, a clinic, child care centre, fire and police station and will be the largest market of this type in Africa. 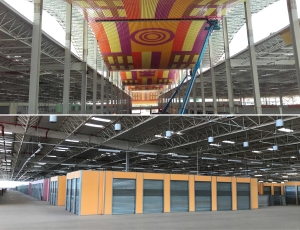 To carry out three key phases of the project, which covers an area of approximately twenty-four acres, we have created jobs for over 800 Ghanaians on the site. It was incredibly important to us to incorporate local culture and involve communities to make a positive difference to their lives, and, what is more, the newly developed market is set to aid the sustainability of local businesses. By attracting tourists from the surrounding countries to Ghana, this project is important to the future of Kumasi’s inbound tourism.

We have also recently been awarded another significant project; the development of the new passenger terminal at the Kumasi International Airport. The terminal will have the capacity to serve one million passengers annually. We will construct new baggage handling systems, check-in points, passenger processing systems, security equipment and a new airport apron for two medium Class C aircrafts to be parked, unloaded or loaded, refuelled and boarded. Finishing will include an extension of the runway, car park, road access
networks and auxiliary works.

With proven expertise in working with Export Credit Agencies internationally, we possess an established track-record in executing sophisticated infrastructure for B2G and B2B projects. Our extensive construction portfolio has positively impacted the countries and communities we have worked with; such developments serve economic growth and can maintain the stability of a country.

A trusted gateway to the infrastructure market in Brazil

Our projects in both Africa and Brazil exemplify our contribution to important works, which are considered key pillars (airports, roads, bridges, and general infrastructure) of the country, therefore aiding development, and economic and social growth. This makes us, Contracta Engenharia Ltda and Construction UK LTD, the obvious partners for UK businesses that are in search for a gateway to launch their own operations in Brazil.

With support from the British Institute of Export and International Trade, augmented by our extensive knowledge of the Brazilian infrastructure and real estate markets, we can accelerate the journey of UK companies to operate on the ground in Brazil, penetrate the Latin American market and offer international market advice along the way.

Brazil is an extremely viable business-related destination. Its annual Gross Domestic Product, totaling at £1.5 trillion, makes them the eighth largest economy in the world. Brazil is by far the biggest economy in Latin America, and 400 of the world’s 500 largest companies operate in Brazil, these include various UK companies such as Rolls Royce, Shell, BP, JCB, Rexam and Experian. Shell is now the largest foreign company operating in Brazil following their acquisition of BG Group in February 2016.

We are very excited to launch our corporate partnerships initiative here in the UK. With almost two decades of infrastructure and engineering experience, we are poised to guide British companies to begin seamlessly operating in Brazil, and we are confident in building professional and long-lasting international partnerships.

Contracta Engenharia Ltd. is proud to be quality certified and a bi-annual audited, based on the ABNT NBR ISO 9001 requirements, is held in each of their construction sites by a Certified INMETRO representative that measures and reinforces the requirements established in the Quality Management System. Contracta Construction UK LTD are also members of the following trade associations; BExA - British Exporters Association, the Brazilian Chamber of Commerce and the UK Ghana Chamber of Commerce.